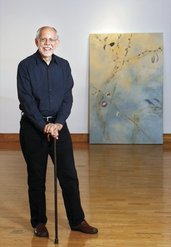 Getting to Vegas: Schefcik moved here from Nebraska at age 8 with his family. His father, wanting to leave the farm and settle elsewhere, tested several states to determine which would be best for his son’s severe asthma. Nevada won.

Career in Art: His art studies began at UNLV.  But after a couple of years, he transferred to Brigham Young University. He volunteered at a museum in his senior year, which sparked an interest in a museum career as a way to support a family. His curated a Western art collection at Sangre de Cristo Arts Center in Pueblo, Colo. He followed the center’s director to Amarillo, Texas, where he spent five years as curator.

He came to UNLV for the opportunity to teach and work with students.  He has seen a diverse group of art students come and go, and some of them, including Tim Bavington, Sush Machida Gaikotsu and David Ryan, are experiencing great success.

Schefcik celebrated his 20th anniversary at Donna Beam in March 2009. He teaches introductory and advanced courses in gallery practices.

Diagnosed with multiple sclerosis in 1994, he is gradually losing motor skills and easily fatigued, but he doesn’t let it hinder his devotion to the gallery — or life.

On art careers: Art school doesn’t promise a career in the arts. After receiving his master’s, he sent 80 letters to potential employers and received three “maybes” before being hired in Pueblo. He tells students, “You will all find your place. There is a place for you out there and you will get there.”

Arts in Las Vegas: "Las Vegas was built on quick money, and people came here to get rich. Their interest was ‘me’ not ‘you,’ so that level of community support has yet to be fully developed. As Las Vegas matures, it will come. There is a really solid group of artists that are here.”

Sticking around? “My roots are pretty deep here. I don’t think I’ll be leaving.” 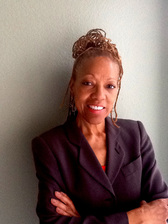 Career in the Art: Florence has been an invited artist and guest speaker at the American Craft Museum, New York City, a presenter at the Society of North American Goldsmiths (SNAG) Annual Conference, a visiting artist at the University of North Dakota, a special guest speaker at Kent State University, and was one of six pacific northwest artists selected by the Smithsonian to participate in an exhibit and panel discussion on jewelry. She has been an invited exhibitor and lecturer for the annual conference of the Jewelry Guild of Vancouver, (B.C.) Canada, and received a commission to design a silver piece  that is part of a collection at the Victoria and Albert Museum in London.

While living in Seattle, she taught in an adjunct capacity at University of Washington, Bellevue Community College, North Seattle Community College. She later worked as a project manager with the Seattle Arts Commission (SAC) for five years. While at SAC, and for many years beyond, Florence served on numerous boards, panels, commissions, and art juries. Prominent among those was Governor Lowryʼs Arts Task Force (transition team), The Seattle Art Museum (executive committee member of Pacific Northwest Arts Council), Pratt Fine Art Center (vice president of the board), and Allied Arts Council (advisory board).